robinhood75
View other files from this member 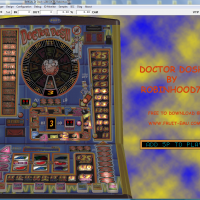 My first ever attempt at a disk real and when I started this I knew it was not going to be easy but after 13 months it's finally finished. Like I said it's my first go with a disk reel so hope it looks ok. This machine is slow when it first starts up due to all reels and the disk spinning at the same time. I decided to use two lamps for the disk as it would grind to a halt with all the lamps going on the disk when it spins so apologies for that also. I tried to make it look as close to the real thing as possible and there was lots of tricky masking to do so you can see the numbers behind while the disk is spinning which adds to the effect.

I had to move buttons and redraw the background so I could get the disk to fit which I didn't know when I took this on, I had help from ploggy on set up of the disk which was a massive help. It's been so long since I started this I can't remember who else I need to thank so for anyone that did help cheers

.
Also I am unable to lamp the writing at the top that says doctordosh due to the disk so I have lamped the bellfruit symbol centre top and that will flash when you have a go all the way.

This is set at 30p play and is £25 jackpot and runs in MFME 9.4 ONLY, if you have a slow computer you may find that the disk is also very slow. Try and push the speed up in the layout to see if that helps. Also this layout turns down the sound on the audio mixer just click your sound mixer next to clock then click mixer then push the mfme sound up to how you want it.

Hope you enjoy this layout if you do then please leave a comment.