vectra666
View other files from this member 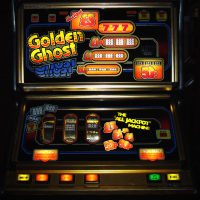 Next up and back to the Old Skool for me is this request from Cashbox1 to make a Dx of Golden Ghost, so here it is.

As we've no actual roms for golden ghost, this layout is using Silver Ghost's roms as they're basically the same machine accept the name,
not sure what the original lamp numbers are but as they don't move i've used the coin lamp (34/31) for the majority of them.

Cashbox1 for the first images given
Jpmstu from the mecca for the final image used
Richie100 for the Silver Ghost roms uploaded
Alex74 for the "silver ghost" classic layout used as a base for this one
Richy1976 for adding coin and payout effects.

Shortcuts are as standard

thank you very much

Thank you for the fantastic layout.

Real old school. Thanks very much