Just a heads up really, be sure to resave all your old layouts with MFME v5.1 into .fml format as the next version no longer supports the loading of .dat files.

You will always be able to convert them using v5.1

Earlier this year I made an attack on this forum and DADsFME as well.

Part of my complaints was I considered it biased towards a couple of issues that have been done and dusted. I know that a couple of my comments were considered offensive by at least one of the people who tried to do their best, in their words.

Note this is the area that I am talking about here my actions, I am not looking to open up the debate at all.  Take this as you want.

Over the past few weeks I have been getting more and more bothered over some of the remarks I made as the weeks have rolled on.  Yes, it’s only words on the internet but I am not 100% impressed about my behaviour.

During this period, I have had contact with one of the people that I probably pissed off in the thread and that PM chain has been nothing but friendly.

More recently, I have been dealing with another person who I pissed off over on another forum via PM’s.  Again, that PM chain has been nothing but friendly.

All I want to do is say thank you very much – you know exactly who you are and I apologise for what I said and insinuated.

The only thing that matters from the wreckage of what has recently happened is our admin here.  I wish him well for 2018 and if this message means anything, consider this…

That is me done – I’ll not be as soft as shit to you lot like this ever again, but the people will know who I mean when they read this and I hope they accept the apology.

Probably the most varied set of machines this one.  Layouts are:

I could start adding the updated MFME6 layouts here if it's easier for the mods, no problem.  I'll just do ten, a day, otherwise I'll just be flooding the thread with layouts.  Bear in mind that the layouts I'll be uploading, here, go back to 2003, onward.  So some of them will look a bit tatty compared to today's layouts.

And here are the first ten in alphabetical order:

Around The Board In 40 Days DX

Around The World Club DX

If anyone has any problems, let me know.

Sadly the last batch from me.  Now all my previous layouts are MFME6 ready I can concentrate on new stuff from here on out.  Got loads of stuff I could be getting on with, so I won't be short of things to do.  Mostly new machines, but there's a few oldies to be done as well.

The Lord Of The Rings - The Two Towers Club DX

Layouts in this batch are:

Back tomorrow with the final batch.

This batch is fine.  It's batch number 9.

Plus I've also added the correct layout for Red Hot X Club.  The layout that was in batch 8 was an older version that I zipped-up by accident.  If you downloaded that version, just overwrite that layout with the .FML file in batch 9.  Sorry about that.

Layouts in batch 9 are:

Batch 6 time.  A nice varied selection of machines.  In this batch are the following layouts:

Over the last couple of weeks we have had some issues with the site, particularly when submitting posts and it taking a while for them to save, and the updating of number of views and replies to a topic.

You will be as pleased to hear as I am that Pete W is going to look into it at the weekend.

Thank you for your patience whilst this matter is resolved and for your ongoing support of the site.

Thanks to fuzion for creating the disc image, here is a fully working version that has also been tidied a little:

Just released at the mecca:

Another DX from me from the Star Wars collection, this time its Star Wars a New Hope.  This again was done from a photo, just skewed straight and lamped pretty much as is with very little work spent tidying things up.  It doesn't always work doing this but in this case I think the rough n ready look works quite well.  I don't really like making things ultra sharp by redrawing stuff or using proper fonts every time.  Sometimes its necessary though when things are totally unreadable.  Its nice and big too for those with large screens, but still looks reasonable on my lappy resized to 1600 x 900 using F3.

, and also to wizard for MFME without which non of us would get the chance to play these great emulations.

I hope you enoy it.

Cheers everyone and Merry Christmas

Some updates to php caused issues with the site, as this site has to use an old version of it. I tried to roll back php but it wasn't having it so I rebuilt the Virtual Server from scratch. Things should now be stabilized.

Finished another one!  This time it's a DX for an Electrocoin true classic, Super BAR-X.  One of the UK's most popular fruit machines from back then.  Set to £4.80/20p/92%  Which means tons, upon tons of regular wins which makes it, in my opinion, the best stake/prize ratio ever done for a BAR-X machine.  Use MFME6.1 to play.

Credits go out to the following people:

Shortcuts for this, are:

Ok, lads.  Think I've fixed everything.  Got two batches this time around.  One batch has got the layouts that were in the previous batches that had incorrectly set SEC meter configurations.  Which are now fixed, hopefully.  And the other set is batch 4.  Which has the next ten in alphabetical order.

Club Who Wants To Be A Legionnaire DX

And layouts in Batch 4 are:

Again.  Any issues, let me know.

Here comes batch 3.  I've added an extra layout to batch 3 because I forgot to add the DX I did for Atlantic in batch 1.  Don't know how it slipped through.

Layouts in batch 3 include:

Club Who Wants To Be A Legionnaire DX

NOTE: This release is for MFME v6.0 and not v5.0 or v5.1 - you will need to download the latest version of MFME to play this ROM/layout combination! 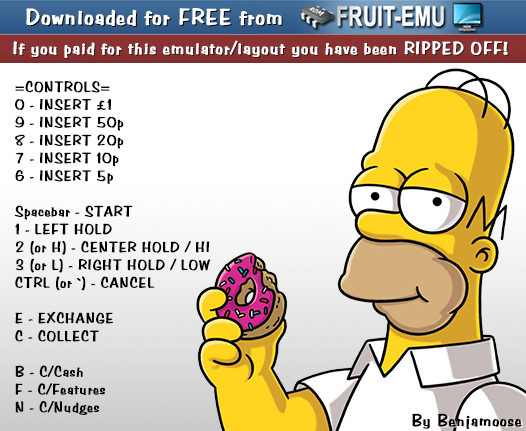 =SPECIAL THANKS=
mazza500 - For gifting me a subscription to Fruit-Emu, for making "Homer's Meltdown Classic" which served as a great resource for lamp numbers and for being supportive.

Reg -  For helping me with any questions I had via PM and for providing me with an excellent PDF guide that helped get me started with understanding the basics of MFME.

TommyC - For thread support and for his DX of "Homer's Meltdown", which assisted in lamp numbering and figuring out specific elements of MFME.

Johnnyafc - For also helping me with PM questions, support, for providing me with some super high quality reel photos at request and for sending me a copy of "Homer's Meltdown"'s manual! Additionally, his basic "Homer's Meltdown" layout also helped with figuring things out and mapping out numbers.

Wizard - For assisting me with MFME specific issues and for support via PM.

Geddy - For answering questions on the upload format, for PM advice and for giving me the go ahead to release here.

And everyone else in the WIP thread that either offered supportive comments, suggestions or feedback that contributed to helping me figure things out.

Only two specific emulator videos up so far, although there are some other odds and sods on there if you have a poke about.

I've got quite a few machines in mind I'd like to do though, so more videos should be appearing in the coming days and weeks.

I'm also drafting out some ideas for a 'History of Fruit Machine Emulation' video, although that'll take a bit more work than me just talking shite for 10-20 minutes.

Anyway, the DOND Power Five video went up yesterday, Roller Coaster has just gone up now. I'll add to this thread as I add videos to the channel.

Many thanks to all the folks who make these videos are possible at all, not least Wizard for his amazing emulator, the layout creators, resource gatherers, site hosters and everyone else

Here is an example of a fully working disc reel. It's not my layout so credit to the original author, I just revamped it for MFMEv5.

Well today has been a beautiful day, the sun shone and the turn out at the service was amazing as today was Sallyannes (Mrs Dachs) funeral. Sallyanne passed away on the 3rd of july following a cardiac arrest on the 29th of june. Unfortunately Sallyanne never recovered. Sallyannes passion was for cooking (how im not 30 stone with the amount of her top quality home cooked food i ate is beyond me). Sallyanne held a full time cooks job at a local preschool were she also taught basic food hygene. Sallyanne also organised many charity nights in which she raised lots of money for Macmillan. Sallyannes 2nd passion was for our pets, 9 in total ( 6 dogs, 2 rats and a hamster) the minute Sallyanne left for work she was eager to get home for them and curl up on the sofa in a onesie and watch soaps and catch up. We met in a little club in the town i was born on the east coast of Yorkshire. The minute Sallyanne walked in the club i couldnt take my eyes of her. I knew i was batting way above my league but i asked her out and Sallyanne said yes. I am the luckiest man alive. 14 years of laughs, love and amazing food.

ps. i hope nobody minds that i have shared this, howerver it really helps me to talk about Sallyanne cos im bloody struggling at the min